My Candidate For The Week 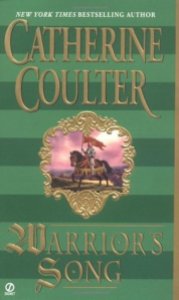 Chandra first appeared in 1984. I’ve rewritten it extensively and changed the title to Warrior’s Song, as this book rightfully belongs in the Song series.

Chandra de Avenell might look like a golden princess, but she fights like a warrior, dreams a warrior’s dreams, and wears a warrior’s pride like a suit of armor. She wants to be strong, independent, and free. She has no use at all for a husband.

Enter the man her father has selected for her. Jerval de Vernon takes one look at Chandra, and he wants her. After he saves her from a very bad situation, he sets himself to wooing her – not an easy task.

How does a man convince a woman he coerces into marriage to become a wife? To give him her loyalty and her trust? Love is something he would like her to consider as well. But what if the wife has no intention of cooperating? Does he break her or finally give up on her?

Warrior’s Song introduces Graelam de Moreton, a real bad boy, who has his mate thrust upon him in the second book of this series, Fire Song.

2 Comments
Share
We use cookies to ensure that we give you the best experience on our website. If you continue to use this site we will assume that you are happy with it.AcceptPrivacy policy