A hero of the crusades, Dominic le Sabre has returned to Scotland in glory and triumph to claim his reward: the beautiful Saxon bride awarded to him as conqueror king. But Lady Margaret of Blackthorne cannot yield to the bold Norman invader.
The beloved daughter of a sacred tribe of Celtic mystics, she fears an ancient curse that could bring further turmoil to her battle-scarred land...and sorrow to her marriage bed. With a word, the lady could turn her wedding into war.
But there awaits in the noble knight's embrace a promise of passion unbound— and a love that neither violence nor treachery can tear asunder, a love both invincible and.

Lady Margaret has be 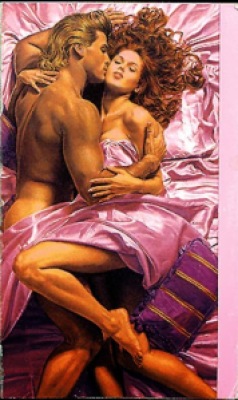 en commanded by the King, to marry the enemy, Dominic, a Norman knight and a powerful warrior who is well known throughout the country. Margaret is a witch of sorts, a healer, and her curse is that she will only bear a heir if she and her husband are in love, a powerful and unyielding love. Her father and childhood friend on intent on making sure that there is no match between Meg and the Norman, whom they view as the enemy. However Meg’s first priority is the people she is in charge to care for. So she marries Dominic, knowing she would face the wrath of her family.But Meg knows her duty. Dominic, has fought through many battles and wars, and has suffered torture, and now he desires one thing above all else, a son, a heir. Little does he know how much he is going to have to prove himself to get his heir. Meg is his wife, and he would never force her, but when he hears of her beliefs and that he will never get a heir without her loving him, he sets out to seduce her. Dominic doesn’t realize that he will discover a beautiful love with his stunning wife and a happiness he could only dream of…

Untamed is the first in the medieval series by Elizabeth Lowell. For years I had heard so many great things about this author, And after recently reading the third in this series, I was really excited to read Dominic’s and Meg’s story. The story starts out with Meg meeting Dominic, but Dominic thinking she is a servant and not his future bride. There is a bit of a spark that flies between them, but then Dominic soon finds out she is his bride. Meg, is apprehensive, and afraid in the beginning of Dominic. She doesn’t know what to expect from him. Dominic, is intent on wooing his bride, since he could never force her to go to his bed with him. He wants her to come to him willingly. Then he becomes jealous when he learns that she may have had a affair with her distant cousin, and cages her within the keep and keeps a watchful eye on her. There is quite a bit of mistrust and misunderstandings that happen, but as the plot thickens, you see how this couple comes together when it really counts.

This story is mostly about this couple learnin
g to trust in each other, and the love that is right in front of them, if they will only reach out to grab it. There is a bit of a suspenseful portion to the plot, that tends to put you at the edge of your seat. Untamed is a thrilling story set in Medieval England, and I enjoyed how this author weaved culture and misconceptions of these two warring people. As you read Untamed, you see that this author does her research quite well. I am a bit of a history buff, so its always fun to learn new facts about different time periods, especially this time period. There is also a bit of a magic/paranormal element involved in the story. Not overly much at all, more like a light feathery touch into the story that adds a certain flair to the plot. I enjoyed seeing these two together. Both are very stubborn and strong willed, so chances are they are going to clash. However I felt like even though their relationship is rocky in the beginning, the rough edges start to smooth out as you get deeper into the story.

The characters I loved, and I didn’t have many issues with either one of them. I felt like Dominic is your typical Alpha male type, however, he does fit the Tortured male hero type as well. He has suffered from great torture recently, and you see how learning to love changes him, but in a much more sexier way. The heroine is a healer, and will do everything she can to protect her people. She isn’t afraid to stand up to Dominic, but she also knows which battles to fight as well. You see how they learn to compromise and slowly start to trust in each other, even though they didn’t trust each other at all in the beginning.

Overall a jewel of a romance, one that will sweep you off your feet and into the magical time of the medieval time period. After reading this, Elizabeth Lowell is moving up my list of favorite historical romance authors. Its rare to see a author blend history, culture, passion, suspense, and romance into a gem of a read. Untamed will stir up passion, emotion, danger into a magically written story that will take you back through time. ENCHANTING!!

First Line
The sound of a war horn sliced through the day, announcing the coming of Blackthorne Keep’s new lord.

Favorite Quote
“And I have become a fire in you,” Dominic said, savoring the moan he had drawn from Meg’s throat. “We will burn together. We will burn…”

Other Books In Series
Forbidden
Enchanted